Grandma and Grandpa – at about the time they became Grandparents.

Our grandparents set out to really enjoy their 40s and 50s. Grandpa had been with the Union Pacific Railroad since his early 20s and had a bent towards entrepreneurism. He was always talking about opening a combination restaurant/laundromat in Bullhead City, Arizona. He was looking to fill a need in place where there was opportunity. He was so serious that at one point we planned to pack up our stock on Isabelle and head to the Arizona desert. Later he took an upholstery class along with my Grandma and my Pop who used his GI benefits. He really dreamed of building a family business that he could leave behind. Carter’s Custom Upholstery was a great success. They did furniture,  airplanes, custom hot rods, Wayne Newton’s horse trailers – just about anything you could think of. At one time Grandpa had a contract to recover all the Eames lounge chairs in municipal airports on the west coast. Even while he was succeeding in business he was still looking for the next big opportunity. 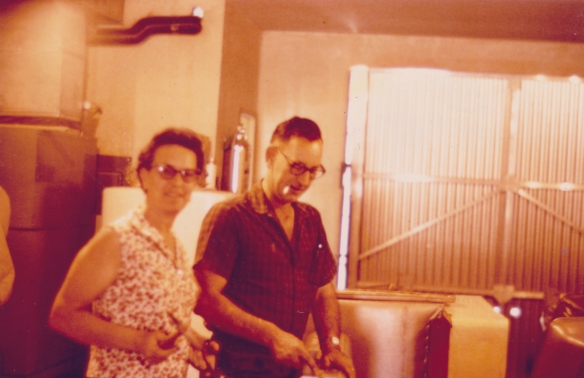 Grandma and Grandpa working in the upholstery shop. Grandma is ready to pitch in with the tack hammer.

Opportunity knocked in the form of his nephew Ronald Owens. “Uncle” Ronnie, as we called him, had been researching mining claims in northern Nevada. He needed funding to file papers, Grandpa anted up, and Cartron Mining was born. To maintain the claim they would have to do annual assay work in the wilds of the high desert. 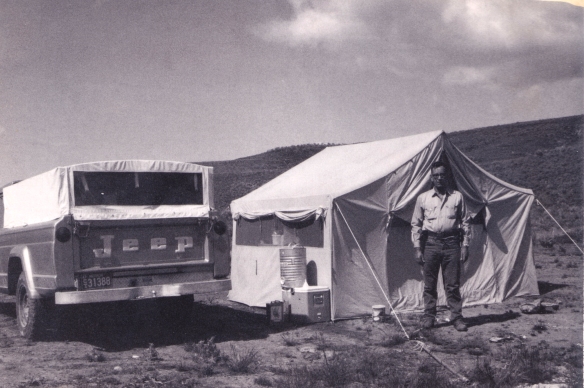 Grandpa purchased this Jeep Gladiator pickup to haul gear up to the Diggins. Uncle Ronnie took this shot on their first scouting trip.

What started as a business venture quickly became a family affair. The mining claim was our summer home. We would bug out of our Isabelle Avenue home base with enough rations to last a month if necessary. We would take fresh provisions for the first week and brought canned goods, dried fruits, and powdered milk and eggs to last beyond.

One of the sleeping tents at camp on the creek. I love that we used Samsonite suitcases to pack for the trip.

The trip to the mine was an elaborate caravan. A Jeep pickup with a canvas camper shell lead the pack with a little Willy’s Jeep in tow. My parents, brothers and I rode in this rig along with the bulk of our supplies. Next my grandparents drove a 1940s era semi tractor with a flat-bed trailer that hauled our Caterpillar bulldozer.  We held this formation until we left the pavement. At that point Grandma and I would take the Willy’s off of the tow bar and we took the lead as we headed into the mountains. Grandma had outfits for us – goggles, bandanas, and wind breakers kept us warm and allowed us to breath through all that dust. Next came the semi followed by the Jeep pickup. About 5 miles from the claim we took the Caterpillar off the trailer and left the semi behind. My pop brought up the rear in the Cat and we worked out way deep into the hills.

Mom and Pop on the Caterpillar Tractor, heading into camp.

The claim was a mere 60 miles from the nearest paved road. It was 25 miles to the nearest town of any kind. Midas Nevada was a living ghost town. Once home to 10,000 miners, by 1966 only 17 people remained. Midas had few amenities, a saloon, a one-room schoolhouse, and a telephone. When Pops and Grandpa went up alone to do assay work we would hear from them once a week when they made the trek into town. When the whole family was at the mine Grandma would make a run about once a week to get ice. We would stop by the saloon for a cold creme soda. One time while we were in town Grandma convinced a resident to let her take an old license plate off of his shop. It dated from 1922 and it still hangs in my living room today.

Grandma did everything at the mine – she drove the Jeep, operated the sluice, and drove the dozer. She also made mean pancakes every morning.

Our claim was on Toejam Creek – as a child I thought this was one of my Grandma’s imaginative nicknames, a couple of years ago I learned that Toejam is a real place on a map. My grandfather created two ponds by diverting the creek. The first he lovingly named after Grandma, Lake Minnie-haha – it was the pond where we worked the sluice boxes. The second pond was one he made for us to swim in.

Grandma swimming in Lake Minnie-haha. It seemed like a real lake to me at the time.

I was relentlessly trying to swim in Lake Minnie-Haha while they were processing dirt. The sluice pond made for a muddy swimming hole. One day Grandma and I took a hike to look for arrowheads – when we came back my grandfather showed me his latest creation – Lake Lorri – our very own swimming hole. Grandpa built a welcoming arch out of timbers – “Welcome to Lake Minnie-haha – Minnie the Moocher, Proprietor. 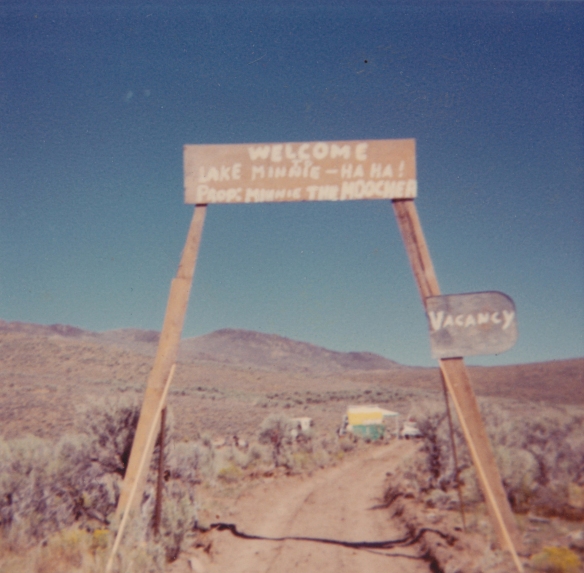 Grandpa erected this sign to let everyone know who was boss at the Diggins. Next lodging about a bazillion miles.

Life at the mine reminded me a lot of life at my grandparents house, structured, organized and fun. There were 3 large tents. One for sleeping, one for cooking, one for just hanging out in – like a living room. In the sleeping tent we were all up on army cots to avoid the dangers of scorpions and rattle snakes. The cooking tent had long folding picnic tables inside holding up multiple camp stoves. Ice chests were stored inside under blankets. Just like at home we were urged to get what we needed out of the ice chests quickly – it was just like the fridge at home, without a light. Dried foodstuffs were housed in wooden boxes or metal chests to keep out animals and pests – just like the kitchen cabinets at home. The third tent had folding tables and chairs inside for playing cards and board games inside, out of the dust and the weather. 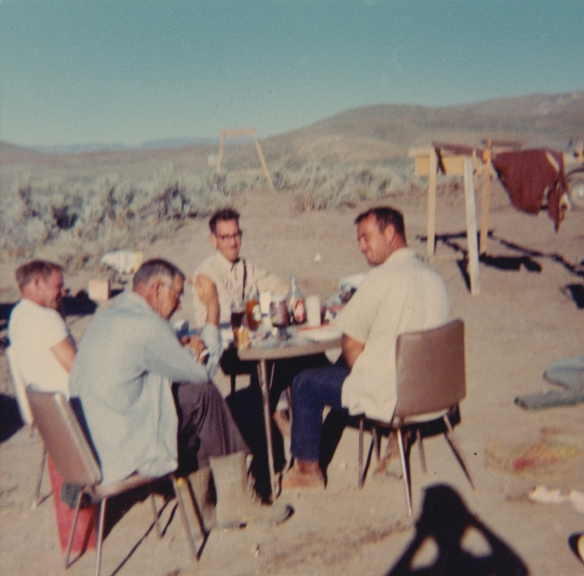 Just like the ancients that once inhabited Toe Jam, we had a vinyl dinette to play cards at.  Seated are Uncle Ronnie, Herb the geologist, Pops, and Grandpa. The shadowy photographer is Minnie the Moocher.

Each day we woke up and had a hot breakfast. My grandparents even had an old dinette set outside for us to eat on. We did dishes in the creek and they started the assay work. If there was heavy machinery moving Grandma would take the kids on an adventure away from the chaos. We would all pile in the Jeep and go someplace to hike or explore. We would pack a lunch and explore all day. 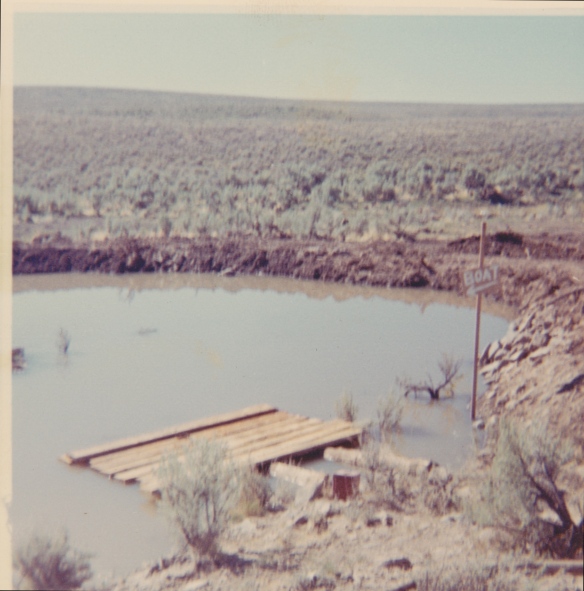 Lake Minnie-haha was so vast that we had a raft used to cross it – it was actually more work that walking the 25 feet around to the other side, but we were adventurers. The field beyond the lake was where Grandma and I found treasures – rocks, arrowheads, fossils – it was paradise.

It was a time of wonder for me. I saw wildflowers and developed a lifelong interest in rocks. Grandma encouraged me in my rock collecting much to the chagrin of my mom who didn’t see why anyone would ever need more than a handful of rocks. Each time we went to the mine I brought home about a hundred pounds of rocks – my mom made me keep them in the backyard and she did her best to dispose of them little by little thinking I would never notice. Of course I did notice, just like I noticed when she made my favorite jeans, or t-shirt, or pet turtle disappear. 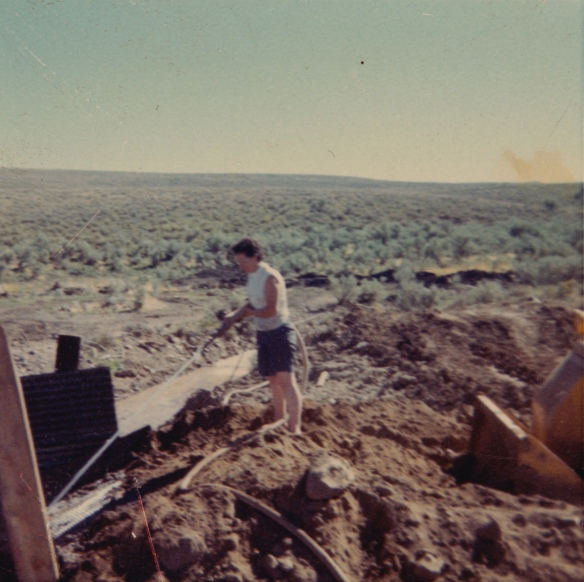 Grandma working the sluice box – she was at her best when she was doing new things. There’s gold in that there mud!

In the evening after dinner we would all pile in the Willys Jeep and go to a spring where my grandpa had built a tin shower. We would bathe and we would get fresh water for the next day from the spring. All clean in our jammies we would head back to camp by way of a large open field full of jack rabbits. The local ranchers encouraged us to shoot them. They were there in such huge numbers that there was no end to them and they damaged the grazing land. So the evening was made for entertainment. Instead of watching TV we hunted down jackrabbits from a moving Jeep. Grandma was a crack shot and loved to stand up in the passenger side and shoot over the windshield. In the back seat my brothers and I would watch her with our ears covered. She was like Annie Oakley to me – it seemed that she never missed. 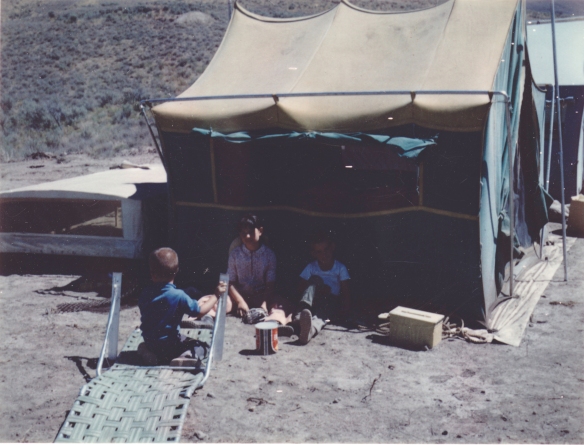 My brothers and I at camp – we found a patch of shade. I never could figure out how to work that lounge chair. Note the ammo can – shooting jackrabbits was on the menu.

One night we took the Jeep pickup instead of the Willys open Jeep when we went for the run to the spring. As always on the way back to camp Grandma was in the passenger seat with her eyes peeled for jacks. I was seated on the Jockey Box in between the seats with my grandpa in the driver’s seat. Grandma spotted one and took aim. KaBoooom!

Jackrabbits beware – Minnie’s got a gun and she’s gunning for you!

Unfortunately she forgot to roll down the window first and it broke into a million pieces. The sound of her 45 inside a closed cab of a pickup was the loudest sound I have ever heard. My ears rang for days and the 500 mile journey home to Las Vegas in the pickup was a windy one.

In case you were wondering, she made the shot, and the windy and dusty drive home was worth it – that busted window was the mark of a great adventure.