Since Pops was an only child and we were raised near his family the only aunts and uncles I saw regularly were Grandma and Grandpa’s siblings. My life was filled with great aunts and uncles whose kids were grown, it was more like having auxiliary grandparents. Most of Grandma’s siblings lived in either California or Las Vegas. Grandma had 7 siblings. Her mom had three sets of twins and poor Grandma was a single in the middle of the pack. When she moved to Vegas her oldest sister Muriel, and her younger brother Newt, along with her baby sister Beula eventually joined her.

All the Cox siblings except Muriel worked at Safeway at one time, Minnie is on the far right. Newt is 5th from the left. Beula must have missed picture day.

By the time I came along Newt had moved to Northern California. Muriel was a bit of a recluse. Beula and Grandma were close, even so they seemed to had a ridiculous sibling rivalry. If Grandma and Grandpa bought a new Chevy, Beula and her husband Tommy would buy a Caddy. Grandma and Grandpa were homebodies and were bored with casinos. Beula and Tommy liked to gamble, they spent most evenings at the Showboat Hotel and Casino. They always talked about how they were comped meals. They made it sound like they always came out ahead, but everyone in Vegas who is honest with themselves knows that the house always wins in the long term. 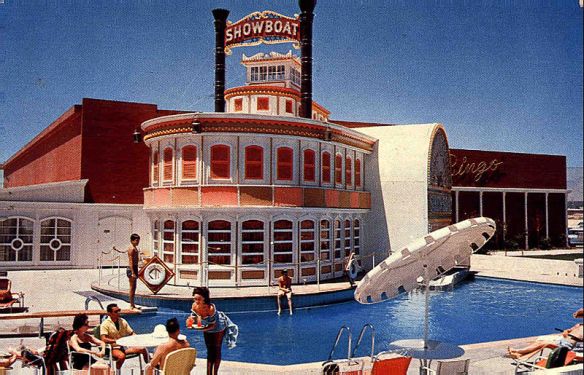 Tommy and Beula’s home away from home.

Beula had a huge personality. She smoked with a long cigarette holder and had a house full of fun and interesting collections. I loved going over there. She would let me play with her lighter collection and I would spend hours sorting through them – there were hundreds stored in dozens of round tins. She talked tough, but you could get her to do just about anything for you if you just called her “Aunty Boo Boo”. 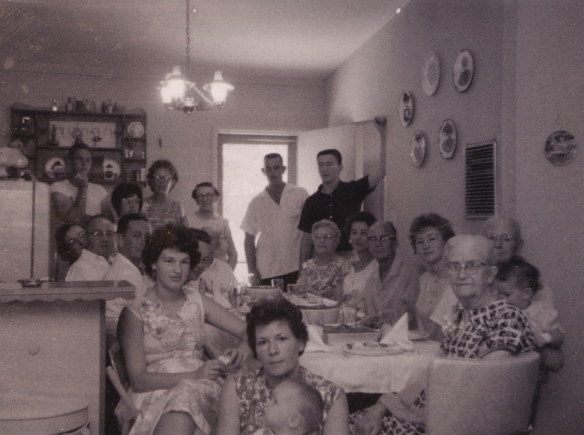 All of us in Beula’s kitchen in 1962 – I’m the baby by the right wall. Beula is front and center holding some other kid.

When I was very small I came down with German Measles while my mom was pregnant. The doctor had told my parents that I needed to be away from Mom until I was no longer contagious and I think she went through some special treatment to prevent her from getting sick. I stayed with Beula during this time. I was confused, sick, and away from my mom. No one explained why I was away. I remember very little except that I felt a longing for my own home and for my mommy. 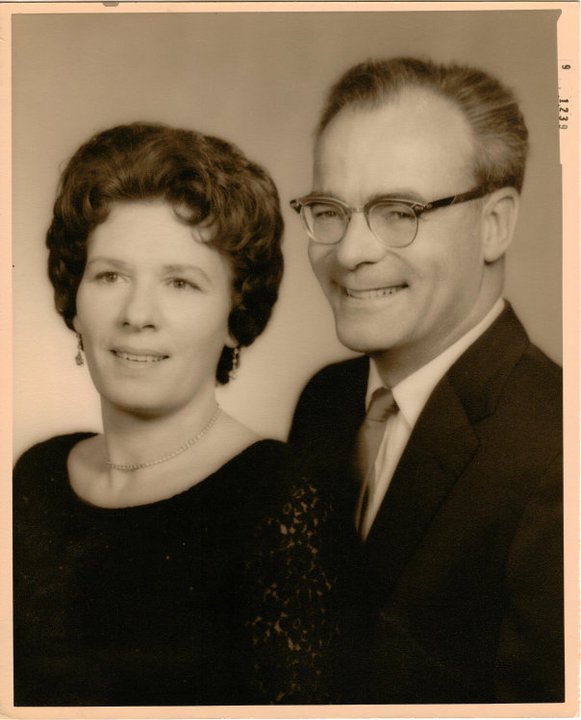 As the time for the baby to come got closer the plan was for Grandma and Grandpa to get Mom to the hospital if Pops was at work. Pops would join them as soon as he could. Beula would take care of me for a couple of days. This would be a fun few days – much better than the quarantine visit.

To be honest I was kind of oblivious to things like pregnancy. I hadn’t been told anything about mom being pregnant or even what that meant. Mom lost a baby between Max and I so she may have been unable to talk to me about it. It could also be that Mom was the youngest child of a mom who was sick her whole life. Maybe her mom didn’t have the opportunity to share things with her. Mom kept a lot to herself, plus she was young, only 19 when I was born. She had been pregnant 4 times by the time she was 24. 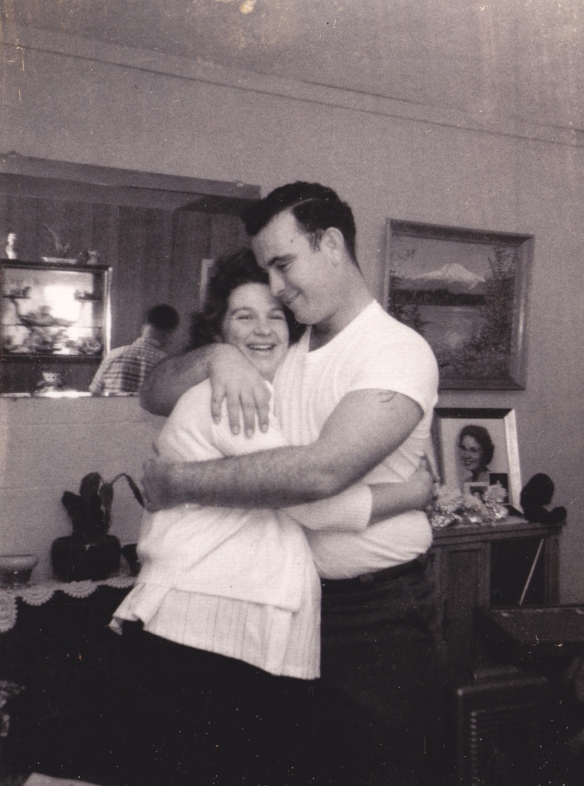 Captain Oblivious. I somehow did not notice that my mom was pregnant.

One day Beula picked me up in the mid afternoon and we met Tommy at the Showboat. We went directly to the bowling alley. I had never been bowling, I was only about 3 years old, but I remember Beula and Tommy changing their shoes and her helping me to roll a ball. It was fun. After some eating out, bowling, sleeping, and more of the same over the next few days I went home to discover that there was a tiny baby at our house. I was thrilled. I had a real live baby doll named Max to play with. 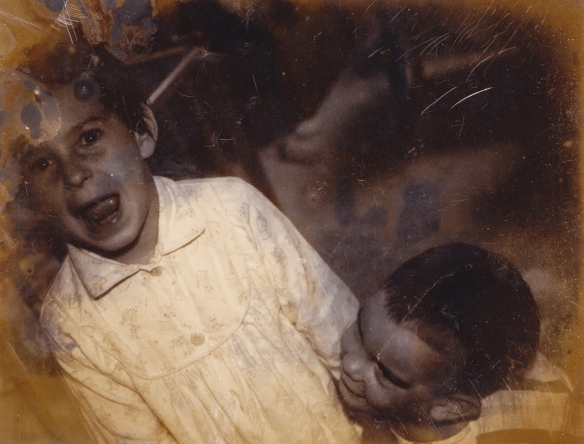 Sadly iced tea and Polaroids don’t mix. Even so this is one of my favorite photos of me and my first brother.

Two years later it was both Max and I who Beula picked up. Again, we left the house and went bowling. By now I was about 5 and was really getting the hang of the process. Not the math, of course, but the idea of trying to hit the pins by rolling a ball. After we bowled we ate at the coffee shop, everyone there knew Beula and they brought me an ice-cream sundae after dinner. Then we bowled some more. We spent a few days with Beula and Tommy bowling and eating. Again I returned home to a brand new baby brother, this time his name was Ronnie.

Beula and my Grandma dressed up for Eastern Star. No my Grandma was not a confederate. In the 60’s Nevadans referred to  Las Vegas and the University as “Southern” – our mascot was the “Running Rebels”.

Like I said, I was pretty oblivious to all the pregnancy stuff. I really have no recollection of my mom being pregnant. So about a year later Beula gave me a call. She asked if I would like to go bowling with her and Tommy. I stopped short and put two and two together. Every single time I went bowling with Beula I came home to a baby brother! That MUST be where baby boys come from. I mean bowling was fun and all, but was it really worth it for an evening of fun? I answered Beula curtly, “No thanks, I’ve got enough trouble already!”

I had no idea where baby girls came from.