Our backyard was not an urban oasis. It was not a landscaped sanctuary from the hustle and bustle of life. It was a crazy obstacle course surrounded by a 6 foot cinderblock wall.

Our backyard was rarely pretty enough to photograph – a couple inches of snow  and – Viola! it’s dressed up nicely.

You entered through a 12 foot wide sliding glass door off of our living room – the three panel wide door was partially obscured by the worlds largest fake mediterranean couch. The slider opened onto a large concrete patio. It had an awning cover salvaged from Grandpa’s house. In addition to the standard issue BBQ grill there were a number of other items on the patio, under the awning protected from the desert sun. Dog food bowls, a giant sewing machine cabinet, a home-made metal forge, mini bike parts, and huge assortment of tools – actually anything that you might need to tinker with at a moment’s notice. 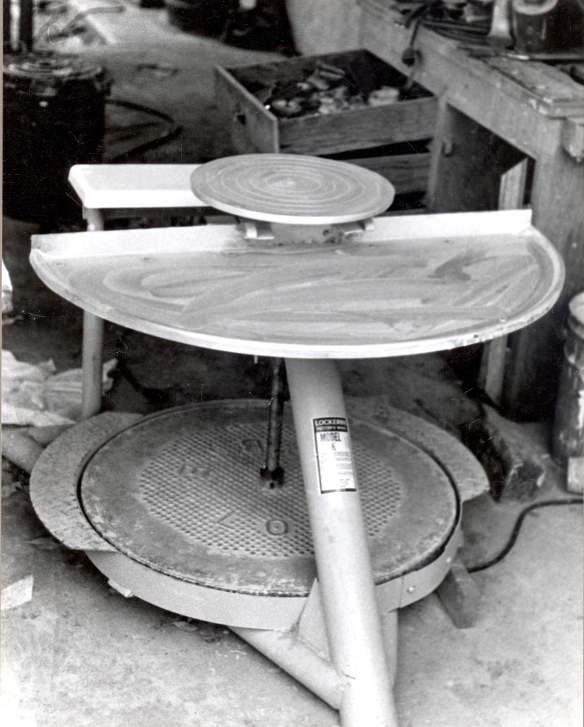 Our covered patio housed a variety of essential items – one never knows when they will need a sewing machine, a shop vac, or a pottery wheel.

There were always a variety of dogs and other pets. Rabbits, birds, a skunk, quail, ducks – Mom was an easy touch, she rarely said no to a new pet.

Amazing creatures abounded in the great outdoors that lay behind our house on Isabelle Avenue – this is Faux Pas playing in the scrap wood pile.

Off to the left there was an old clothes line. After we upgraded to that new-fangled clothes dryer Mom used this area to grow a vegetable garden in. Mom loved to garden, prior to getting the new dryer this farmer’s daughter managed to squeeze strawberry plants or artichokes into the flower beds, so a six-foot-wide patch of the earth was the equivalent of inheriting the family farm. She tilled and weeded everyday until the fall harvest was over.

To the right there the washroom/workshop/storage room/metal shaving museum tucked into the side of the house. Along the fence line there was a barn-shaped metal storage shed – it housed the lawn tools, welding equipment, and possibly all the missing Philips screwdrivers and end wrenches. It was like a vortex. Tools went there to die. On the roof you might find the hide of last year’s deer as Pop experimented with methods for tanning leather. 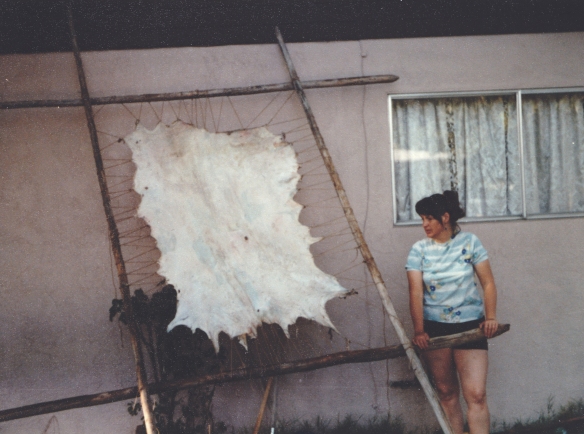 This is a tanning experiment in the front yard – more successful than the hides left to dry on the roof of the shed. This also served as an impromptu educational exhibit for children walking past our house to the elementary school at the end of our block. Yes, Virginia, that was Bambi. Ahhh the circle of life.

My pop had a foot thick slice from a large pine tree on a stand in the middle of it all. It was a target for us to practice throwing tomahawks at. I know that the tomahawk target is practically standard issue in most backyards – right up there with the BBQ grill. I’m sure there was one in your backyard too. 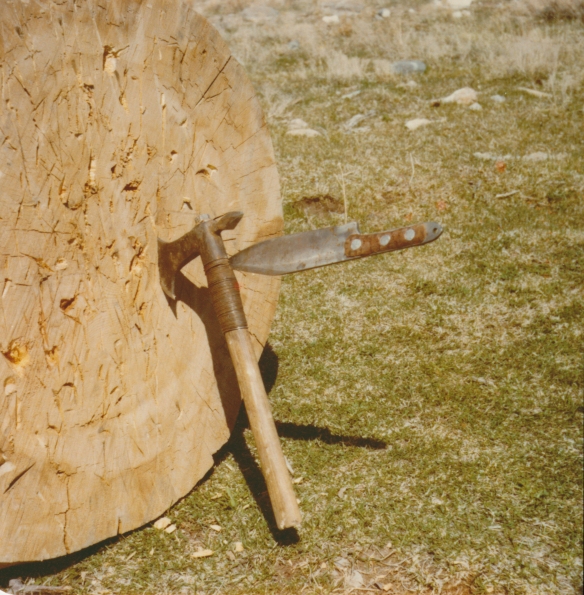 Tomahawk Target – one of the backyard essentials

We threw tomahawks and knives several times a week and visited the emergency room at least once or twice a year.

This is not our backyard, but we did do this back there. Note Ronnie’s form and Max’s awesome waffle stompers.

We always had a dog or three back there so there was always poop to scoop. The dogs back here were “outside” dogs and they included the very creatively named “Goldie.” She  came to our house when I was six and died peacefully under the old clothes line when I was in my early twenties, having lived a full and exciting life. In her prime she had stopped and cornered a burglar who had broken into the house next door. She was a sweet dog as long as you came into the yard through the house. Over the fence or through the gate meant that you were an intruder. This didn’t bode well for the unfortunate meter man who happened to come when no one was home.

This is not Goldie, this is Minka – she spent her formative years in our backyard on Isabelle Avenue. A caffeine addict from puppyhood she drank several Big Gulps each day.

All in all it was place of utility and chaos. After a long day of car repair, Budweiser, and New York strips it was the place where many a Saturday night took an interesting turn.

One autumn Saturday we had the whole crew there. Poore Boy, Red, TJ, Tiny – I think they had attempted to repair a car earlier in the day – they may or may not have been successful, I can’t recall. Pops fired up the grill and sent us all out into the backyard with shovels to scoop up the dog poop. He had something different in mind for the evening, and it required a clean yard. After dinner he had us arrange lawn chairs out in the middle of the yard facing the brick wall behind the clothesline. My brothers and I threw a few tomahawks – Pops and the guys had a few more Buds.

Right about dusk Pops showed us what he had up his sleeve. He brought out a 2X4 with 3/4” holes drilled about 12 inches apart. He set up on the ground and placed an emergency candle in each hole. You know, those candles you keep in the pantry in case the power goes out. He lit the candles and announced that we were going to have a candle shoot. We used .22 caliber rifles to attempt to shoot out the flames on the candles. The idea was not to hit the candle and knock it over – the idea was to snip the wick with the bullet, snuffing out the flame. 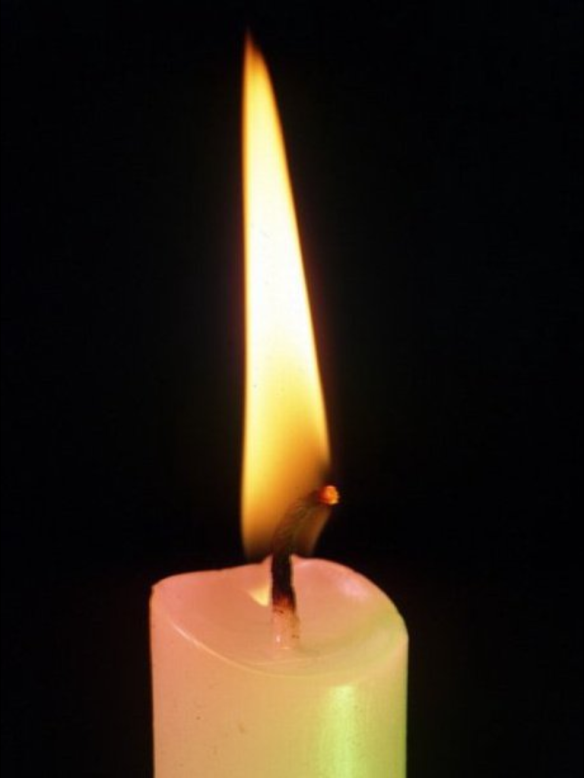 The idea is to shoot at that little gap between the candle and the flame – poof! It’s dark!

Remember – we were not on a farm or out in the country – this is downtown Las Vegas. Oddly, location was not one of the considerations that Pops contemplated when he devised his little spectacle. 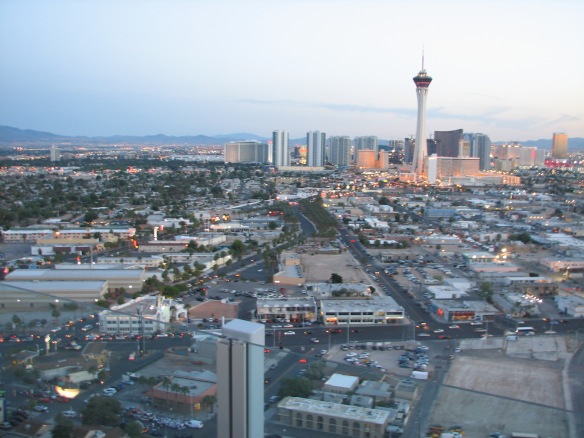 Isabelle Avenue is on the left hand side about half way up – perfect spot for a shooting range.

Everyone, kids included took turns and with a bit of practice, everyone could snip the wick. I know I felt like Annie Oakley the first time I did it. As the evening wore on the guys would shoot a bit, drink a bit, shoot some more. Round by round the snipping became tougher and tougher. By about 9:00 the only ones able to make the shot were me and my brothers. The excitement was wearing off with each miss. Something was needed to liven this party back up and Poore Boy had an idea. 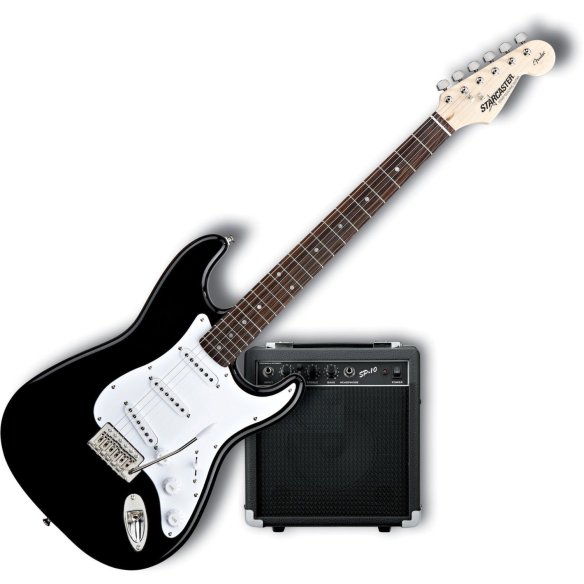 Nothing compliments the sound of gunfire like amplified music.

He took Red inside and they brought out my brother’s electric guitar and amplifier. Red plugged in the guitar and started playing – he turned the volume up to the max and started playing the Star Spangled Banner – Hendrix style. Poore Boy emerged from the sliding glass door with a 12 gauge. Everyone laughed – you can’t shoot a shotgun in your backyard in downtown Las Vegas! Steve didn’t seem to care. He loaded it up, leveled it at those candles and fired – BOOM! Flames, wax, buckshot – all spattered against the brick wall, with the sound of the shotgun only barely modulated by the national anthem. Their eyes went wide, the guitar went silent – then without speaking they grabbed their guns and ran into the house giggling like little girls. They all sat silently in the living room waiting to hear the sirens that never came.

Here’s a shot of a candle shoot in my yard – a safe and legal 4 miles from the city.

A family tradition was born that Saturday. At my place there’s a Memorial Candle Shoot every year on or near January 29. There will be grilling, good friends, candles, and gunfire. Guitars of all calibers are welcome. Shotguns are prohibited.

Stop by if you’re in my neck of the woods.

23 thoughts on “The Candle Shoot”